Enjoy upto 40% off on our Eid Sale. Deiveries resume on 17th May 2021 Insha Allah. Have a blessed Eid! Dismiss

This Model is PTA APPROVED & WITHOUT Facetime.

Our vision has always been to create an iPhone that is entirely screen. One so immersive the device itself disappears into the experience. And so intelligent it can respond to a tap, your voice, and even a glance. With iPhone X, that vision is now a reality. Say hello to the future.

With iPhone X, the device is the display. An all?new 5.8?inch Super Retina screen fills the hand and dazzles the eyes

The display employs new techniques and technology to precisely follow the curves of the design, all the way to the elegantly rounded corners.

The first OLED screen that rises to the standards of iPhone, with accurate, stunning colors, true blacks, high brightness, and a 1,000,000 to 1 contrast ratio.

A tiny space houses some of the most sophisticated technology we?ve ever developed, including the cameras and sensors that enable Face ID.

The most durable glass ever in a smartphone, front and back. Surgical?grade stainless steel. Wireless charging. Water and dust resistance.

Familiar gestures make navigation natural and intuitive. Instead of pressing a button, a single swipe takes you home from anywhere.

The purest expression of iPhone.

To create a continuous surface, with nothing to get in the way of your experience, we replaced the Home button with new yet familiar ways to navigate.

Intuitive gestures make it easy to get around.

A single swipe from the bottom takes you home.

To reveal all your open apps, simply swipe up and pause.

Swipe down to instantly open the customizable Control Center.

Press and hold the side button to ask Siri a question.

Double-click the side button to make secure purchases with Apple Pay.

HDR.
Now playing for the first time on iPhone.

iPhone X is a true High Dynamic Range (HDR) display. You can watch movies and shows in Dolby Vision and HDR10. Your HDR photos will look even more amazing. And you?ll be able to watch

The most durable glass ever in a smartphone.

The front and back are all glass ? the most durable we?ve ever made, with a strengthening layer that?s 50 percent deeper. A seven-layer ink process allows for precise hues and opacity, and a reflective optical layer enhances the colors. And an oleophobic coating lets you easily wipe off smudges and fingerprints.

A revolution in recognition.

Your face is now your password. Face ID is a secure new way to unlock, authenticate, and pay.

Face ID is enabled by the TrueDepth camera and is simple to set up. It projects and analyzes more than 30,000 invisible dots to create a precise depth map of your face.

Face ID is so secure you can use it with Apple Pay. And check out with just a glance.

The TrueDepth camera analyzes more than 50 different muscle movements to mirror your expressions in 12 Animoji. Reveal your inner panda, pig, or robot.

How much innovative thinking can you fit into a tiny space? Quite a lot, it turns out. The TrueDepth camera system houses sophisticated cameras and sensors for new capabilities only possible with iPhone X.

The art of photography. Simplified.

A larger and faster 12MP sensor. A new color filter. Deeper pixels. And a new telephoto camera with OIS.

Both rear cameras have optical image stabilization and fast lenses for outstanding photos and videos even in low light.

Introducing A11 Bionic. The most powerful and smartest chip ever in a smartphone, with a neural engine that?s capable of up to 600 billion operations per second.

A second-generation performance controller and custom battery design that lasts up to two hours longer between charges than iPhone 7.

The new Apple?designed three?core GPU is up to 30 percent faster than A10 Fusion.

Wireless charging for a wireless world.

With no charging cable required, iPhone X is truly designed for the future of wireless.

Charge with wireless charging stations and mats in hotels, cafes, and airports around the world.
?

Introducing AirPower mat. Just set your iPhone, Apple Watch, and AirPods anywhere on the mat to charge them wirelessly.

A phone that?s all screen required an entirely rethought OS with new capabilities and gestures.

Pay friends in Messages.* Let Siri be your translator. And discover new music with friends in Apple Music.

Tap. Swipe. Scroll. See, you already know how to use it. 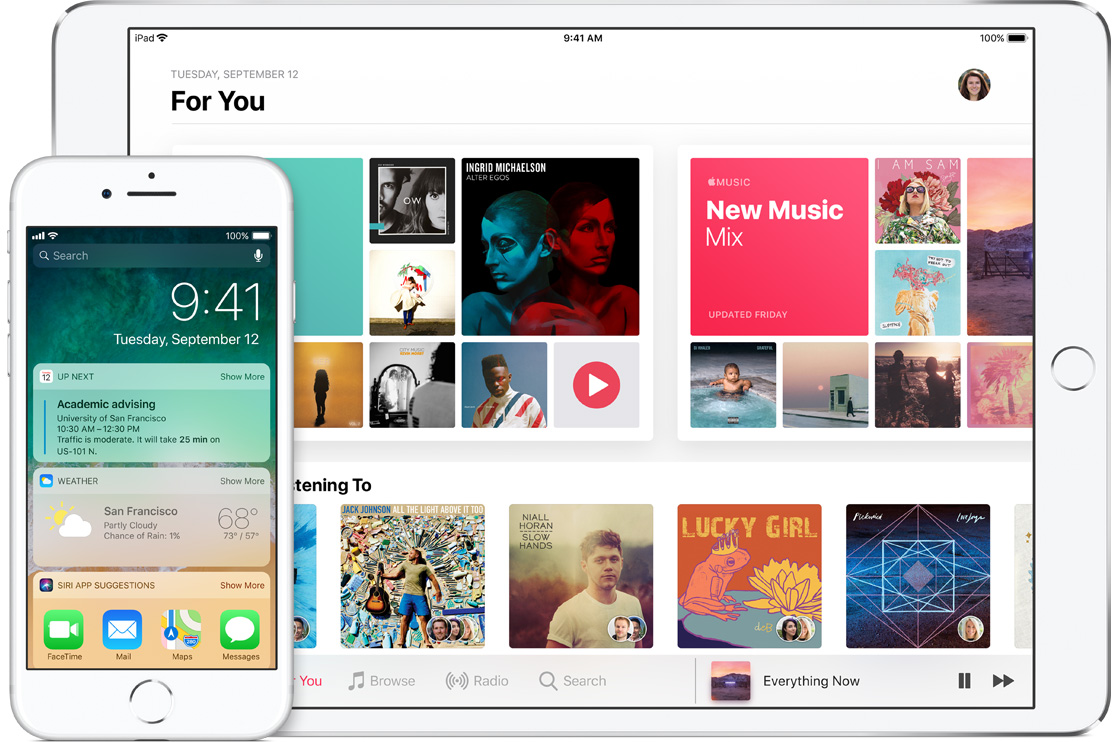 From the moment you pick up your device, you?re up and running. iOS has always been designed for Multi-Touch interactions. So you can tap your favorite app and get right to work ? or play. Swipe to the right to see what?s going on today. Scroll through thousands of photos in seconds. Everything about iOS is designed to look beautiful and work beautifully.

More capable than ever. So you can be too. 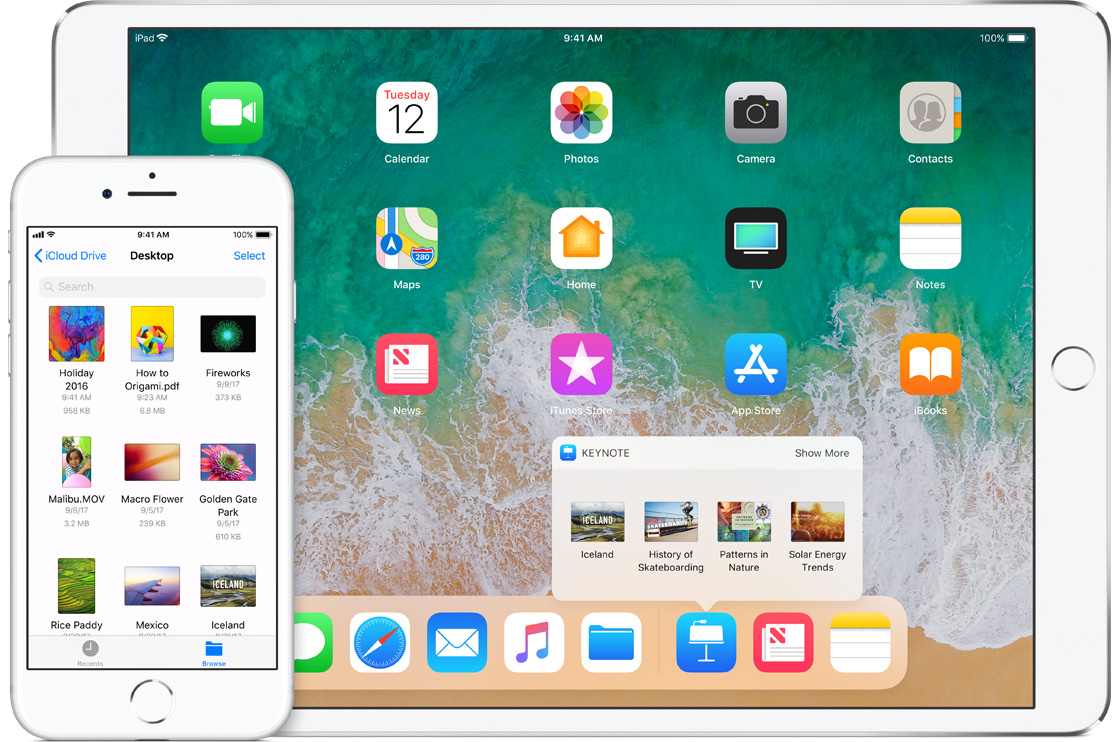 iOS 11 brings iPhone and iPad to life like never before, making every experience more powerful and personal. New features and capabilities fundamentally improve the way you do things. The Files app brings all your files together. With the new Dock on iPad, finding your favorite or recently used apps is effortless. Drag and Drop lets you easily move text, photos, and files around on your iPad, while multitasking makes it even smoother to work in multiple apps simultaneously.

Hardware and software designed together. For an experience that stands apart.

When hardware and software are made for each other, everything just works. Incredibly well. Apps make use of hardware features such as the powerful A11 Bionic chip with its neural engine. iOS 11 takes advantage of the security of Face ID and Touch ID to bring Apple Pay to Messages. And the increased refresh rate of iPad Pro makes Apple Pencil even more responsive. 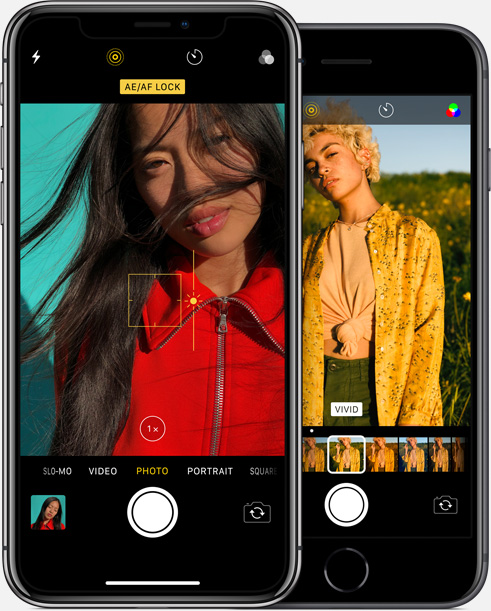 When you tap the shutter button, the iPhone camera?s image signal processor performs billions of operations ? including things like face detection, autofocus, and exposure control. All so you can capture unbelievably vivid pictures in a flash. 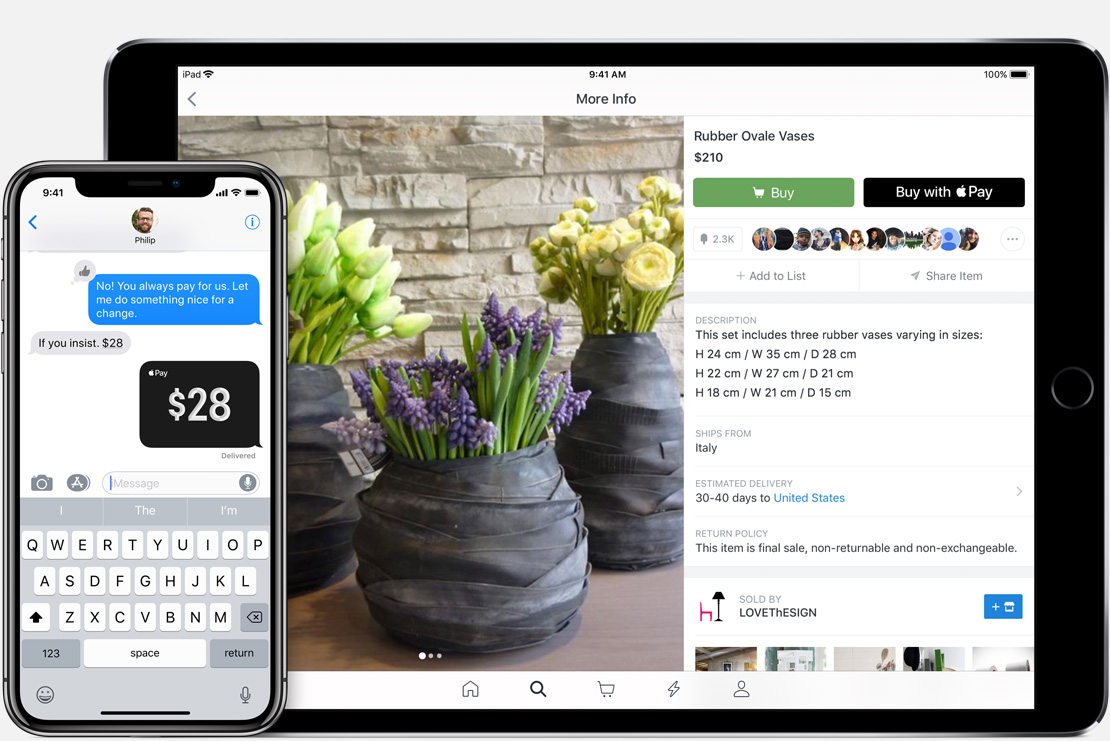 With advanced authentication technology like Face ID and Touch ID, and a dedicated chip designed to keep your payment information secure, shopping has never been easier. Or safer.

An OS with a remarkably high IQ. 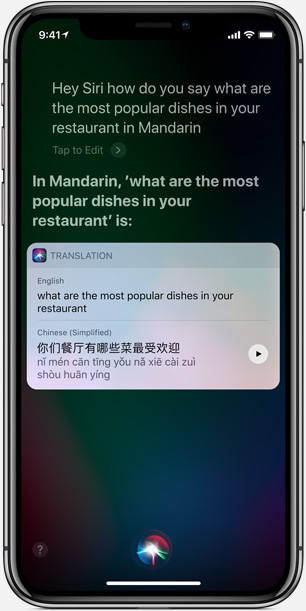 Talking to Siri is an easier, faster way to get things done. And iOS makes Siri even more helpful. Thanks to advanced machine learning, you can simply speak naturally. And Siri does too, with a new, more expressive voice.

Siri works with your favorite apps.

You can ask Siri to send someone a payment using Square Cash, book a reservation through OpenTable, and much more. And the number of apps incorporating Siri is growing every day.

Switching to iOS from Android is easy. 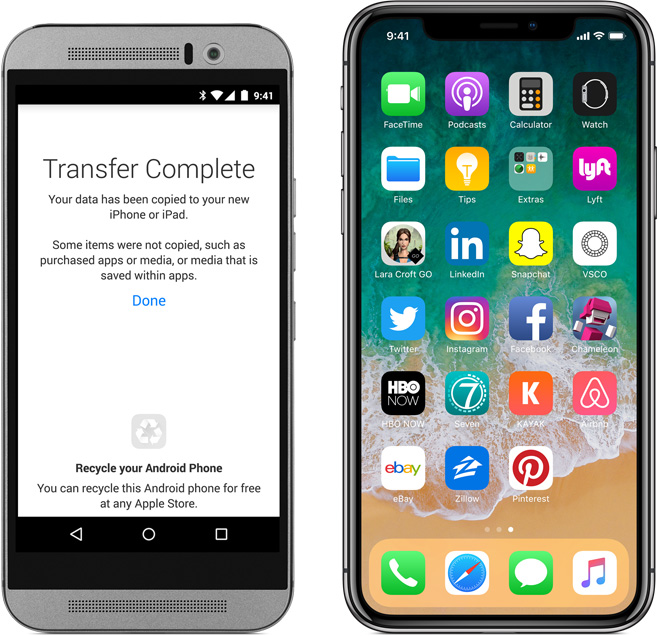 The Move to iOS app makes it surprisingly simple to move all your important stuff, such as contacts, calendars, and photos, to your new iPhone or iPad. Do it yourself or come in to an Apple Store and let a Specialist help you. Either way, Apple Support is always standing by if you have any questions.

The iPhone X display has rounded corners that follow a beautiful curved design, and these corners are within a standard rectangle. When measured as a standard rectangular shape, the screen is 5.85 inches diagonally (actual viewable area is less).

Pay with your iPhone using Face ID in stores, within apps, and on the web
Complete purchases made with Apple Pay on your Mac
Receive and redeem rewards using rewards cards

Model A1901 does not support CDMA networks, such as those used by Verizon and Sprint.

Use your voice to send messages, set reminders, and more
Get intelligent suggestions in Messages, Mail, QuickType, and more
Activate with only your voice using ?Hey Siri?
Listen and identify songs

Lasts up to 2 hours longer than iPhone 7

With new features and capabilities that let you get more done quickly and easily, iOS 11 makes iPhone more powerful, personal, and intelligent than ever.

Accessibility features help people with disabilities get the most out of their new iPhone X. With built-in support for vision, hearing, physical and motor skills, and learning and literacy, you can fully enjoy the world?s most personal device. Learn more

Nano-SIM
iPhone X is not compatible with existing micro-SIM cards.

Apple ID (required for some features)
Internet access12
Syncing with iTunes on a Mac or PC requires:
Mac: OS X 10.9.5 or later
PC: Windows 7 or later
iTunes 12.7 or later (free download from www.itunes.com/download)